Dare to be a Daniel: The Lion’s Den—Believing God 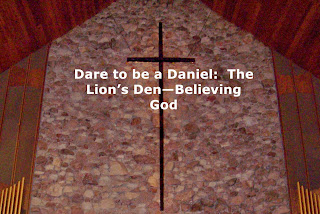 But Daniel purposed in his heart that he would not defile himself with the portion of the king's meat, nor with the wine which he drank: therefore he requested of the prince of the eunuchs that he might not defile himself.
(Daniel 1:8 KJV)

Now when Daniel knew that the writing was signed, he went into his house; and his windows being open in his chamber toward Jerusalem, he kneeled upon his knees three times a day, and prayed, and gave thanks before his God, as he did aforetime.  (Daniel 6:10 KJV)

Last year (2015), I started a series of posts on believing God, which included getting to know God through His Names.  In order to fully believe God, like Daniel, we need to know His characteristics.  To read the posts in that series see: Believing God.

Believing God at His word is a far cry from believing in God.  The difference is stark.  James tells us demons believe in God and shudder (2:19).  Believing God is Who He says He is and will do what He says He will do changes our perspective on life and how we live.

Then was the king exceedingly glad for him, and commanded that they should take Daniel up out of the den. So Daniel was taken up out of the den, and no manner of hurt was found upon him, because he believed in his God.
(Daniel 6:23 KJV)

From this short study on Daniel, we know that Daniel believed God.  His faithfulness allowed God to use him mightily.  Therefore, I offer you the concluding paragraphs of my sermon; along with a few other thoughts and additions.

Shadrach, Meshach, and Abednego, answered and said to the king, O Nebuchadnezzar, we are not careful to answer thee in this matter.
If it be so, our God whom we serve is able to deliver us from the burning fiery furnace, and he will deliver us out of thine hand, O king.  ....
He answered and said, Lo, I see four men loose, walking in the midst of the fire, and they have no hurt; and the form of the fourth is like the Son of God.  (Daniel 3:16-17, 25 KJV)

Two stories from the book of Daniel are fairly well-known:  the fiery furnace (chapter 3) and the lions’ den (chapter 6).  We see God at work in and through His servants—servants willing to die rather than deny Him.  Daniel in the lions’ den took place after Babylon fell to the Medo-Persian Empire (led by Darius).  Daniel had already found favor with Darius; however, the other presidents and princes were not so favorable to Daniel (6:3-5).  Due to jealousy the other presidents and princes manipulated Darius to make a decree that all prayers and requests were to be made to Darius alone; disobedience meant a sure death in the lions’ den (6:6-9).

As we know, Daniel remained faithful to his God and believed Him.  Even into his eighties Daniel continued to kneel in prayer towards Jerusalem in full sight of others (6:10); he also continued serving in another pagan government (Medo-Persian)—remaining faithful to God.  His faithfulness sent him to the lions’ den, where God closed the mouths of the lions.
In Daniel chapter 6, we read the famous account of Daniel’s defying the decree to pray only to Darius.  Daniel knew the cost of continuing to pray to the Lord and he did it anyway—as openly as before.  For Daniel there was no hiding, he continued to pray three times a day on his knees, with the windows open (in full view of others) towards Jerusalem.  Those around him clearly know of his witness and character.  Clearly there was a great degree of jealousy within his colleagues.  God blessed Daniel greatly throughout his life—this obviously riled his colleagues.  They tried all they could, including lying to Darius (counting on his self-centeredness) to bring Daniel down.  May we all have Daniel’s boldness in prayer!

Daniel believed God.  Daniel believed God.  This belief helped Daniel have the courage to face the consequences of disobeying the law of man.  God delivered him from the lions’ den, just as He delivered Daniel’s friends from the fiery furnace!
Rest assured, God will do the same for us.  God will keep us safe or bring us to Him through death.  During our times of trial, we can claim the sure promises in the Word, in particular Psalm 27 and Psalm 91.

Daniel’s life could be summarized as follows:  he was solid in his beliefs and prepared to follow through on them; he was faithful in small things, therefore, God gave him more responsibilities; because Daniel stood for a simple conviction—he had a stepping stone for greater challenges in the future; because Daniel obeyed God, God placed him where he could have a great impact on a pagan culture.[2]
May we, like Daniel, be a positive, godly influence on our culture!  We can impact the world by being markedly different from it.  The world is hungry for what we have, even if they do not know it.

In summary, it is about God—His faithfulness and provision to His people, even during seasons of great hardship, trial, and tribulation.  Our belief in Him, staying true to Him no matter the cost reaps huge dividends, if not on earth, then in heaven.  We can note that in Daniel’s (and his friends) story:  how people of faith respond, our testimony makes a huge difference.
In closing let us consider the words of an old Sunday school/VBS song written by Phillip Bliss, Dare to be a Daniel.

How can you believe God today, living in a world that grows increasingly dark?

Please join with me in prayer:

Heavenly Father, thank You for the witness of Daniel showing us how to live boldly for You in a sinful world.  Help us to continue to count the cost of what it means to follow You no matter what is expected of us.  Woo us to learn more about You and Your character, so we can grow our faith and trust in You.  Remind us that whatever happens, as long as we have Jesus as our Savior, we will be safe and secure in You alone.  In Jesus’ Name, we pray.  Amen.

From My Heart to Yours,


[1] Beth Moore’s Daniel: Lives of Integrity, Words of Prophecy (2006, LifeWay Press) was the inspiration for many ideas in this sermon/blog post.
[2] Charles Stanley From the Pastor’s Heart September 2014
[3] Dare to be a Daniel by Phillip Bliss.  Public Domain.

All comments are moderated. Please use care in posting comments or replies. If you wouldn't say what you are writing in person, rethink your words. Remember words can build up or tear down. Speak the truth in love.

My Reading on Goodreads

Note:   Since it has been several weeks since I posted here, I thought it was time to let those who come here that I am still alive. ... 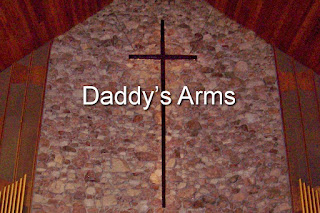 Dare to be a Daniel

Value of a Soul